Nový Hrádek is situated in one of the locations that are most valued for their natural phenomena.

The landscape is dominated by a massive and impressing landform of the two enclosed meanders of Dyje, where two rocky promontories of the Umlauf and Ostroh on the Austrian and Moravian sides stand against each other, with a deeply cut river valley. The steep rocky slopes are covered with interesting forest and steppe plant communities, which include many endangered and protected plant and animal species.

The value of the natural environment of the ruin itself is also outstanding. On the courtyard and within the Lower Castle, several small-leaved lindens and common maples grow, which create the typical silhouette of the castle on the horizon. The highest part of the buildings, such as the ledges and crowns of the bulwarks or crevasses in the walls are overgrown with drought-loving shrubs and plants, including the golden alyssum flowering in early spring, and tufts of white stonecrop blooming later. The rare shrubs growing here include wild cotoneaster, buckthorn (Rhamnus catharticus), cornelian cherry dogwood, and burning bush (Euonymus verrucosus). The front wall of the hunter’s lodge is overgrown with a large ivy bush. Among the interesting forest plant species  are for instance the rose sowbread, and the mighty stalks of the false hellebore. During the times when the castle fulfilled its military function and the southern slopes facing the river were kept clear of vegetation, some of the critically endangered species found refuge here, such as the showy mullein (Verbascum speciosum), hartwort (Tordyllium maximum), and piedmont bedstraw (Cruciata pedemontana).

Also the fauna of the castle is interesting. The sunny spots are favoured by the wonderfully coloured green lizards, which occasionally fall prey to our largest snake – the Aesculapian snake, which can grow up to two metres in length. Bright spotted salamanders can be seen on rainy days on the access paths and in the moat, one beautiful owl species nests there – the tawny owl, and the crevasses are inhabited by several bat species. Observant visitors can also see some conspicuous looking insects, such as the large black carpenter bee, and shiny rose bugs and bee beetles (Trichodes apiarius) sitting on the flowering heads of Libanotis pyrenaica, and some colourful butterflies fly over the large courtyard – e.g. the painted lady, red admiral, and the scarce swallowtail.

Nový Hrádek  belongs to the most strictly protected area of the Podyjí National Park, where there are only minimum human impacts on the nature. The natural processes are spontaneous here, and the area is in a relatively harmonious condition. 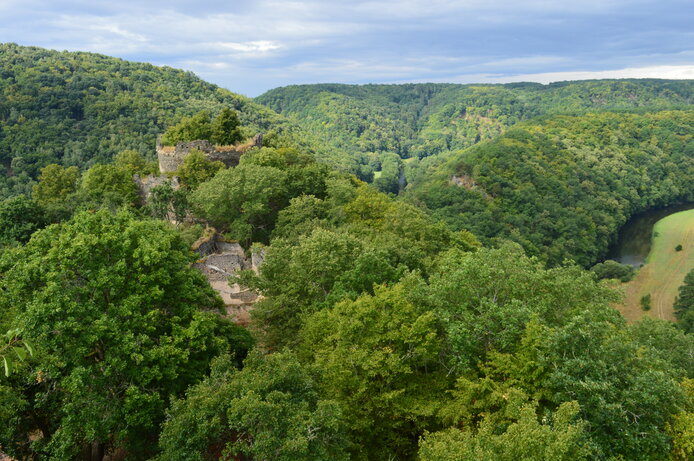